This is the type of release that really gets The Blot excited. What started as a traveling custom show entitled Experiment 626 featuring 8 inch vinyl Stitch figures has transformed into a full blown production series of six 5 inch vinyl Stitch figures based on the custom designs of some of the top artists in the game. You all know I’m a huge Disney fan and even though I’ve never seen Lilo & Stitch, I was really pumped to hear Disney and MINDstyle were doing this. 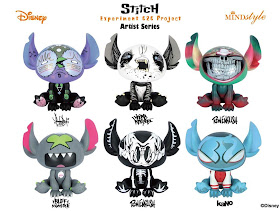 This new Disney x MINDstyle Stitch Experiment 626 Artist Series really came out firing by featuring some amazing and well known designs by Ron English, Buff Monster, kaNO, Peekaboo Monster and Angry Woebots. If you’re wondering how there are only five artists but six designs, it is because English had two different designs produced (X-Ray and Grin). These figures had their limited release at last weekend’s FX International show in Orlando and will be hitting stores worldwide this summer. I definitely plan on getting a few of these this summer at SDCC.

Each Disney x MINDstyle Stitch Experiment 626 Artist Series vinyl figure will retail for $25 and each design is limited to just 500 pieces.
The Blot at 9:00 AM
‹
›
Home
View web version